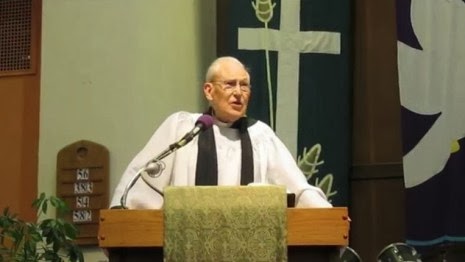 Years before answering the call to "Swim the Thames" and set off on the Canterbury Trail, I had the privilege to read works by some of our modern Anglican minds such as John Stott and J.I. Packer.  Stott has joined that mighty cloud of witnesses and is now watching us run the race.  J.I. Packer is still with us and every day that we have him here should be counted a blessing.

Packer has contributed greatly to the Catechism of the Anglican Church in North America, which is still in draft form.  Anecdotally, I've have heard that these were made on a manual typewriter.  I'm putting together my reflections on that document and will be posting them soon.

J.I. Packer has shared his thoughts on the importance of confronting heresy with Christianity Today Magazine.  You can find them here.
Posted by Andy at 8:54:00 AM

I think he hits the nail on the head here,

"What is common in this post-Christian age is all the various forms that are taken by the fantasy, and it's a very potent fantasy, that all religions are somehow one. Somehow they are the same religion. Somehow they are all of them pointing to the top of the same mountain, and as we climb we become more and more aware that we're getting closer to everybody else who is climbing by other paths—Muslim, Buddhist, Hindu, or whatever—and when we get to the top, we shall find that we're totally together."

"It's a sweet dream, but the early Christians rejected it out of hand. And, I think, so should we."

As to the problem of disciplining a church leader, I think a longer discussion would be in order to adequately address the issues raised by various churches' structures, and what might be the best and most Biblical approach.