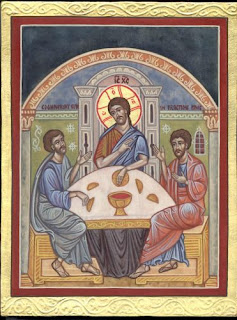 Let me take you back 20 years.  I want to apologize in advance if my words are triggering because that’s not my intent. Imagine for a moment, that today is September 11, 2001.  We’ve witnessed the most horrific attack on our Republic in our lifetime.  Earlier we saw towers attacked, and crumble into clouds of debris shortly afterward.  In our own back yard, we saw another plane plow headlong into the Pentagon while yet another plane cratered into rural Pennsylvania.  Our lives, as we knew them were forever altered.  Now, in the afternoon as we travel to our homes in our car or van pools, our minds still trying to come to grips with the horrors witnessed earlier. We begin to talk among ourselves.

I’ll quickly concede that this is not how homilies in Eastertide typically open, yet in meditation and prayer over this morning’s Gospel reading, the thought seemed to jump right in front of me.


Like all of us who were of understanding on 9/11, Cleopas and his companion were no doubt overwhelmed by a similarly traumatic and rapid succession of events that had occurred over previous 80 or so hours.  During the Seder, they learned a dark conspiracy was unfolding.  They witnessed the betrayal of their master.  The pair witnessed the brutality of Christ’s death, suspended between heaven and earth.  Now this morning, a few hours earlier, a group of the women in their band burst into their presence with ecstatic words of Angels and empty tombs, going as far as stating that the Master was alive.
So now, in the early afternoon of a Spring Sunday, the pair set off for their village of Emmaus. They would want to be off the road before sundown and away from the dangers hidden in the darkness.

Who were these travelers? The Bible Expositor R Kent Hughes suggests that the traveler mentioned by name in this passage (Cleopas), could also be the Clophas mentioned in Saint John’s Gospel, who was the the husband of Mary mentioned in John 19:25.  If this were the case, these travelers were actually the maternal Aunt and Uncle of Jesus. It would’ve inserted an additional level of pathos into the scene as it is now a middle-aged couple discussing their Earthly nephew.  As the couple continue on their trip, we see Jesus entering into the scene in a way that Father Adam Rick, the Anglican Chaplain of Hillsdale College seem to be almost playfully coy at times.

This moment presents a few questions going forward in the story: How did the followers of Jesus fail to recognize their master who just placed himself into the moment?  And how, given Saint John’s words of how we’ll be known in the resurrection, did they not recognize him?  Luke’s words speak to this fact in v. 16 in describing this phenomenon using the Greek work Krateo, where for the moments, their vision was divinely subverted.  As if a filter were placed on a lens, the Holy Spirit had control of their perception of reality

Jesus interposes Himself into the conversation (Vv. 17-24)

While we can only conjecture what it may have looked like: Jesus in his resurrected body was free of the constraints of mortal flesh and inserted himself in a position where he could begin a discussion with the two travelers. His question was met with a mix of sadness and incredulity.

Cleopas’s answer to Jesus’ question was telling on a few levels.  It seemed to infer that the events of the previous 72 plus hours were widely known by those pilgrims who’d come to Jerusalem for the Passover. Unlike a secret arrest where the victim is secreted away to be executed behind closed doors.

In spite of Cleopas’ initial response, Jesus presses the issue.  It well could have been that Jesus was wanting to hear him verbalize his grief.  Not for Jesus’ sake, as Jesus already knew the burden Cleopas was carrying.  He also knew (as we know), that bottled up/unexpressed grief has a caustic effect on both the soul and body.  So, responding to Jesus’ continued questions, Cleopas spills his guts.

[Luk 24:19-24 ESV] 19 And he said to them, "What things?" And they said to him, "Concerning Jesus of Nazareth, a man who was a prophet mighty in deed and word before God and all the people, 20 and how our chief priests and rulers delivered him up to be condemned to death, and crucified him. 21 But we had hoped that he was the one to redeem Israel. Yes, and besides all this, it is now the third day since these things happened. 22 Moreover, some women of our company amazed us. They were at the tomb early in the morning, 23 and when they did not find his body, they came back saying that they had even seen a vision of angels, who said that he was alive. 24 Some of those who were with us went to the tomb and found it just as the women had said, but him they did not see."

Now, the LORD who knows all things already knew the heart of Cleopas.  He knew that the words flowing from that heart were those of heart-crushing grief.  Like Peter and the remaining eleven, many left everything behind to follow Jesus and did so at a cost that had financial, social, and familial costs.  But unknown to Cleopas in this moment, he was now speaking with the Great His Priest of Hebrews 4:

[Heb 4:14-16 NASB] 14 Therefore, since we have a great high priest who has passed through the heavens, Jesus the Son of God, let us hold fast our confession. 15 For we do not have a high priest who cannot sympathize with our weaknesses, but One who has been tempted in all things as [we are, yet] without sin. 16 Therefore let us draw near with confidence to the throne of grace, so that we may receive mercy and find grace to help in time of need.

Hearing the sad lament, Jesus responds to Cleopas in words that sound much harsher in contemporary English.  In the original language, it was if Jesus was saying: “Look, you’ve completely misunderstood what has transpired.  Have you forgotten all that the prophets spoke concerning the Christ?”

It was here that Jesus begins to proclaim what is ostensibly the first “Easter Sermon” as he walked the pair through the Old Testament’s teaching of how the Christ would be the “suffering servant.  While the text is silent as to the specifics of Jesus’ teaching, we can imagine what Jesus shared that afternoon.  Perhaps, Jesus began with the Protoevangelium in Genesis:

He could have easily stepped intro Deuteronomy as Moses spoke of a “coming Prophet”:

[Deu 18:15 ESV] 15 "The LORD your God will raise up for you a prophet like me from among you, from your brothers--it is to him you shall listen…

As the band pressed onto Emmaus, Jesus may have wended his way through the Psalms, Isaiah, Micah, Zechariah, and even the words of John as he proclaimed his message of repentance along the banks of the River Jordan.

Jesus reals Himself in the Breaking of the Bread (Vv. 28-33)

Cleopas and his companion were now approaching the end of their journey to Emmaus.  Jesus, however, feigned to be traveling onward.  Clearly, this illusive traveler had become a friend in these few short hours.  Given the approaching nightfall and the dangers a lone traveler might encounter on the road, Cleopas encourages Jesus to spend the night with him and the companion traveler.  Jesus agrees and joins them around the table.  Around the table that evening, Jesus took the bread, blessed it and gave it to his companions. It was now time for the Holy Spirit to move a second time that afternoon.
In a blink, the identity that had been supernaturally cloaked was revealed in an instant, allowing the companions to see the resurrected Christ with them there in Emmaus.  Then, just as quick, Jesus left their presence.  In the reverberation of the moment, both remarked how on the road, Christ didn’t merely quote or cite scripture, he opened and explained it in a way that stirred them, setting their hearts ablaze.

This morning, as we’ve considered the Emmaus moment we’re able to perceive that like Cleopas and his companion, we too are in a situation that’s not unlike theirs.  The COVID-19 pandemic  has affected the axis of all our lives.  This is borne out in the fact that between you at home and me in this pulpit is an empty church that bears stark witness to the reality of the moment.

Yet, the same Great High Priest who availed himself in that moment of need, sits ready in our time as well. We may never personally experience an Emmaus moment in our lifetime, but in our intentional and focused reading of God’s word and pressing deep in prayer, He will make his presence known. As He makes his presence manifest in our hearts, it will cause our hearts to burn afresh. 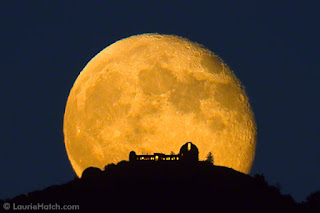 Lent 2020 has passed under the light of a waning Gibbous Moon.  And in the words of a mime spinner, "This was the Lentiest Lent he'd ever Lented".  No doubt, this was quipped with the Wuhan pandemic in view.  And, but by Divine miracle, we'll wake tomorrow in the grip of this virus as Easter breaks across Suburbia Majora.  With all of this, I want to share how the previous lenten season touched and stretched me.

Lent began in the Dark.  Literally, for me Lent began at 4:45 AM on Ash Wednesday as I rose to prepare for the 6:30 & 8:00 AM Observances at All-Saint's. On that day too, I would encounter another type of darkness after arriving at work and discovering that in a Post-Christian world, far too many have absolutely no knowledge of Ash Wednesday. I was met with curious stares until one woman asked "what's that on on your face?  Did you forget to wash this morning?'  Trying to keep it light, I smiled and said I bumped up against my own mortality.  "Ohh, did it hurt?" she replied in a tone of concern.  From here I knew she had now context for the ashes on my forehead and it opened a door to share the season of Lent with her, explaining how may followers Christ observe this season as a time to fast, pray, and reflect in these weeks leading to the Easter season.

Lent in Lockdown.  At Lent's onset, the COVID-19 was on another Continent and effecting "other people".  Little did we know, that in two short weeks our Republic would seize up and grind to a halt.  Many were now watching their retirement portfolios evaporate as Stock Markets around the world cratered.  People were compelled to self distance and stay apart.  Churches ceased to gather for corporate worship.  March 15th saw our final public gathering and inwardly, I grieved for the saints who were being placed under interdict by reactionary public officials and denied the comfort of the Sacraments and the benedictions of their priests. A bright light in this darkness was being part of a technology-gifted parish that was able to employ existing technical resources in order to either prerecord or livestream the Holy Week from All-Saints.  In fact, tonight I'll be watching myself in the Easter Vigil.

You can't pursue a Holy Lent in your Own Strength.  Of all the takeaways from Lent 2020, for me this was the greatest.  All my attempts at this in years past we abysmal failures.  Like Charlie Brown, I'd run headlong towards the football only to have it yanked away.  Simply put, you'll find yourself incapable of ever doing this in your own strength.  Experientially, I was reminded in this season, the deeper one leans on the Spirit, the easier this pursuit becomes.