Taking in the news this week, I caught the story of how New Mexico hairstylist Antonio Darden publicly announced that he would withhold his tonsorial services to Governor Susanna Martinez over her stand on homosexual marriage. As I read this piece in the paper (Yes, I still read print journalism), my mind wandered back to a story about three years ago concerning another New Mexican business owner, Elaine Huguenin.
Ms. Huguenin and her husband, who operate a mom n' pop photography business were approached by a pair of lesbians wishing to have their commitment ceremony captured on film. This broached the couples religious beliefs and to wit, they politely informed the women that they would be unable to photograph the event. Shortly thereafter, the couple were slapped with a $6,000 fine levied on them by the New Mexico Human Rights Commission.
Now for the question of the morning: Will we see this same commission levy a similar fine against Mr. Darden for his clear case of discrimination and denial of services against Ms. Martinez?
OK, its the Catbird's turn to beef. If there's a law on the books that bars "Discrimination" against an individual over "gender equality" issues, that law needs to be enforced uniformly, or it needs to be struck down and those penalized by it must be compensated. I know that there are those who will give a thousand tortured reasons why these cases are are different, but they are identical.
OK New Mexico, Fine Mr. Darden or cut the Huguenin's a check.
Posted by Andy at 8:21:00 AM No comments:

Meanwhile, over at Bad Vestments...

Tip of the Zuchetto to the elves over at Bad Vestments...
Question: If minimalist composer Phillip Glass decided to build a Cathedral, what might it look like? 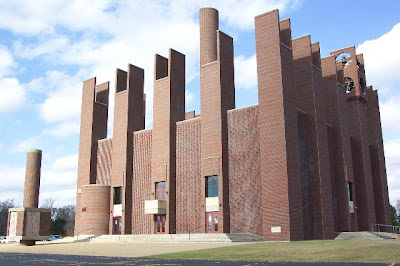 The term "Middle Class" has been buzzing around the airwaves like those green flies around sterecore cani. I'd like to discuss what each side of the debate would have as the future of these enigmatic denizens of Surburia Majora would become.
Stay tuned....
Posted by Andy at 7:00:00 AM No comments: