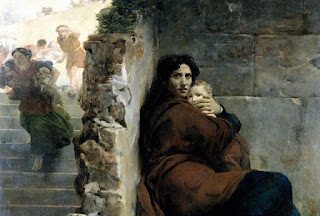 Today, much of the Church remembers a day that is strangely dissonant to the joyous strains of the Christmas Season.  While much of the twelve days are full of mirth and good cheer, today echoes of terrified little boys and the inconsolable cries of mothers helpless to stop the unfolding slaughter  that exploded in unimaginable horror before their eyes. Gari Melchers, an Artist of the Nineteenth & early Twentieth Centuries captured the moment in his rendering here on the page.  Try to Imagine for a moment you, your wife, your mother, or your sister jamming her frame in a a crevice in a desperate ploy to escape Herod's  murdering thugs?

Saint Matthew captures this moment in the second chapter of his Gospel:


"Then Herod, when he saw that he had been tricked by the wise men, became furious, and he sent and killed all the male children in Bethlehem and in all that region who were two years old or under, according to the time that he had ascertained from the wise men. 17 Then was fulfilled what was spoken by the prophet Jeremiah: 18 "A voice was heard in Ramah, weeping and loud lamentation, Rachel weeping for her children; she refused to be comforted, because they are no more."

Many have asked how was this overlooked by contemporary historians?  This is likely that given the depths of Herod's moral turpitude, the killing of a fifty or so peasants would hardly be a footnote.  Yet our God has a long memory and doesn't skip over footnotes.

Today, my heart is broken afresh for all mothers who've found theirselves crying out like Rachael.  The mother who wakes to learn that a son took his life in a dark, despairing night.  The mother who receives a police notification that her son, a sleeping passenger, had his young life extinguished in a auto mishap.  For the mothers who were deceptively led by Planned Parenthood to believe that  they alone offered the best option.  Nor can I fail to remember mother's who right now, sit by beds of desperately ill children with the bleakest hope for recovery.  For the reader who's found themselves in this, I will not offer platitudes.  I will offer you Jesus of Nazareth.  As the late Francis Schaeffer would oft remind us, He is the God who is there.

The Coventry Carol captures this day

A message from Foley Beach, Archbishop of the Anglican Church in North America (ACNA).

Its Christmas Eve here in Suburbia Majora.  But as I type this I'm aware that its already early Christmas morning for friends in Melbourne Australia, and in the coming minutes for American service men and women spending this season on the Korean Peninsula.  Christmas Eve, traditionally, has been a time of in-gathering for those professing the most nominal Christian faith.  But reality has a way of taking a wrecking ball to our cherished idyllic memories.  There are those tonight and tomorrow will not be part of this in-gathering.  The soldiers, sailors, and airmen standing watch across the globe. The EMS community, taking solace in a hot cup of coffee.  Even the humble sales clerk, on duty for our "convenience" will be apart from family and loved ones tonight.  Saddest of all perhaps, are those whose sudden passing have created a sudden vacuum at the family table. In all, I could recite a sad litany of all the things that separate and divide this morning.  However, I refuse to as we who are followers of the way are in the closing hours of Advent, that season of remembrance, recalling the Incarnation of the very Word of God, and His promised return.

The Father's promise of His Son is found in the earliest books of scripture, but given greater clarity by the Prophet Isaiah in his prophesies to ancient Judah and Israel as he proclaimed:


Isa 40:1-5 ESV - Comfort, comfort my people, says your God. Speak tenderly to Jerusalem, and cry to her that her warfare is ended, that her iniquity is pardoned, that she has received from the LORD's hand double for all her sins. A voice cries: "In the wilderness prepare the way of the LORD; make straight in the desert a highway for our God. Every valley shall be lifted up, and every mountain and hill be made low; the uneven ground shall become level, and the rough places a plain. And the glory of the LORD shall be revealed, and all flesh shall see it together, for the mouth of the LORD has spoken."

A two-sided season; in Advent, we give thanks for the gift of Immanuel (God with us). By the Father's will, He stepped out of the eternal and into time and space that he might walk with humanity.  Ultimately, He would become the propitiation (the satisfactory offering) for our sins; and not for ours only, but also for those of the whole world as told through Saint John's epistle.  Yet in the second side of this season, we're encouraged by the truth that the Son of God who came to sojourn with, and deliver humanity has promised to return and set his creation back to order.  Both testaments of holy scripture, along with the historic creeds of the church make this truth manifestly clear: "He will come again in glory, to judge the living and the dead; and His Kingdom will have no end."


In the closing hours of Advent and onto the season of Christmas 2019, take comfort in the truth that there is a God who so loved the World (and you), that He gave His only begotten Son that whoever believes in will not perish, but have  eternal life. 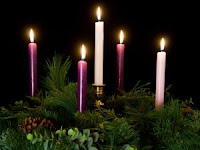