One of those Days when ya' just want to call out... 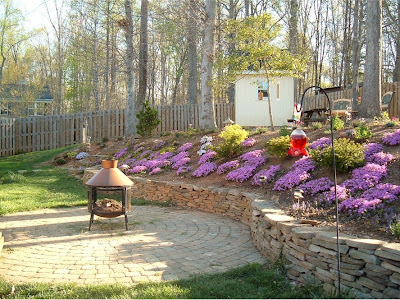 There is only one thing better than the Spring, and that's a morning in the Spring! This is one of those mornings where every plant in the garden is saying "Andy..... You could really use a day off."

I took this photo yesterday morning before work. I tried to get one of my Deacon heroes, St. Frank, into the picture but the glare kept it from happening. And oh... The Greek rendering of "Paradise" gives us the connotation of "the well-maintained garden of the King". This may seem like a totally random thought but think for a moment...

If heaven were as stark as a "Kiss and Ride" Lot on a Sunday morning, the presence of the LORD, His Holy Spirit, and His Son Jesus would make it glorious beyond our deepest dreams. The fact that heaven is ensconced in magnificent gardens is just the sweetest cherry on top.
Posted by Andy at 8:01:00 AM 1 comment:

Its Friday, and the sun is out for the first time in nearly a week. To boot, there are no clouds in the sapphire skies above. Welcome back April...
Posted by Andy at 3:17:00 PM No comments:

I had a "tipping point" moment yesterday after posting my prayer for the families of the Blacksburg 32. In this prayer, I made reference to a "son of Belial" to the shagrin of some Episcopal Deacons. I have, after some thoughtful prayer, disassociated myself with the North American Association for the Diaconate (NAAD), and its online community, "ANGLODEACONS".

Last year, I joined NAAD and subscribed to their online community in the hope of receiving insights from seasoned Deacons and Archdeacons. And to this, Deacons like Ormonde Plater have provided a wealth of knowledge to all things Diaconal. Unfortunately, our brother Ormonde seems to stand nearly alone as a bright light in these communities.

To my disappointment, these forums have been little more than enclaves for the Religious Left, and platforms for counter-scriptural ideas. At this stage of my journey, I simply have neither time nor stomach for this.

The fields are truly "White unto Harvest". This is not the time to be propping up bad doctrine and apostate Bishops. Its high time to be about the Master's business and the proclamation of His message to a lost universe.
Posted by Andy at 9:06:00 AM 1 comment:

A Prayer for Blacksburg 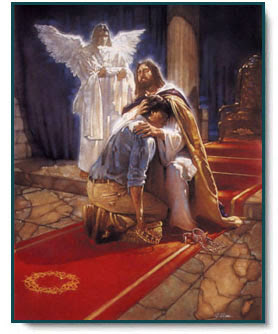 Almighty LORD,We cry out and plead your grace and mercy for the families of the 32 in Blacksburg. Grant your consolation to those whose hearts have been ripped from their chests by this son of belial. Deal with him according to YOUR perfect justice, and not our own.
We look to you in this fallen, sin-sick world as our only advocate, our only true comfort,and our only lasting peace. We don't need false platitudes or rash human reaction, we need you, our LORD.
We pray this in the name of our Lord Christ Jesus, who lives and reigns with you and the Holy Spirit,One God forever and ever.
Posted by Andy at 9:15:00 AM No comments:

Note from the seat... I want to posit my personal vision for the bi-vocational ministry over the next few installments. Tonight's installment gives us the introduction to the paper.

INTRODUCTION. Asking someone to describe their vision of/for ministry will bring a wide variety of answers. These answers may also vary dramatically where the individual is in their journey of the faith. My own answer has evolved considerably since 1989. I’m confident that this vision will continue to be refined with time, maturity and the sanctifying Hand of God.

An important fact needs to be established at the beginning of this proposition; this is not “my ministry”. This service belongs to the LORD, of which He’s granted me stewardship. From eternity past, our Lord saw fit to choose me, not according to my merit, but according to the riches of His glory. It’s in this greater calling that the Lord called me to serve His saints. As well as those He has predestined to sonship in Christ Jesus.

I became acutely aware of this call early in life but had no way of quantifying it. I wasn’t alone in discerning this call; my grandfather was aware of God’s hand on me from birth. It would take some time, but I responded to the Lord’s call to service in 1988, with the blessing of my pastor, Albert Pickerall. I came under the leadership of my first true mentor in 1990. Over the next two years, Dr. Charles E. Crissey placed me in a rigid program of study in preparation for entry into vocational ministry. Upon completion of my examinations, I was licensed as an Exhorter within the Church of God, Cleveland Tennessee. I would serve within this church until 2003 when I had to step away from the denomination for theological reasons.

My original vision of/for ministry was strongly influenced by the Church of God. Unfortunately, this was a denomination steeped in Arminian/Semi-Pelagian (Pelagian) theology, and strongly influenced by the waves of aberrant teaching that was becoming rife within neo-charismatic circles. I initially attempted to stay in step with the teaching and doctrines of my church. This would become increasingly harder as waves of aberrant teachings became woven into the denominational fabric. (Though unaware at the time, I had already begun to adopt the spirit of “Semper Reformata”).

This theological crisis started to reach a boiling point in 2003. I was seeing the hollowness of Arminian/Pelagian theology. I saw how those under the yoke of this worldview were being bound in an insipid for of legalism which left them spiritually weak and immature. Adherents were bound in an anthrocentric faith that placed far greater weight on the experiential and the esoteric than it did on the full counsel of God. In my final analysis, there was a mere degree of separation between the Church of God, and the Roman Catholic Church which they would strongly repudiate. I could no longer defend the doctrines of Cleveland Tennessee, and subsequently resigned from my pastoral responsibilities in October 2003.

God’s providential hand led me back to the Anglican Communion in March 2005. It was a communion in crisis thanks to the course undertaken by the Episcopal Church (ECUSA).
So now the stage is set; I’m now on the verge of returning to bi-vocational ministry in a Reformed Anglican community.
Posted by Andy at 10:23:00 PM 1 comment: 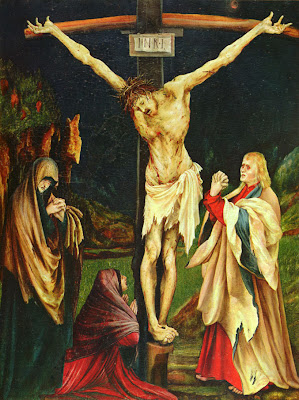 He made Him who knew no sin to be sin on our behalf, so that we might become the righteousness of God in Him. 2 Cor 5:21

Its 11:12 AM on Good Friday, Roughly equivalent to the “5th Hour” when Jesus of Nazareth would have been taking those agonizing steps along the “Way of Sorrows” onto the final sight of his execution at the hands of the Roman Government. The fact that He was still alive at this moment was a miracle in itself. He had already been physically assaulted by the High Priest’s security forces, scourged to an unrecognizable mass of torn human flesh, beaten with rods, and endured multiple lacerations to His face and scalp. Another man would have lapsed into shock from blood loss alone. I believe that our Christ was still alive at this hour simply because His mission had yet to have been fully completed. As hellish as his ordeal had been to the moment, it would only become more severe. In a few excruciating moments, the one who “Knew no sin”, would be made “sin on our behalf”.

He didn’t become a sinner. The one who knew no sin remained sinless. He became the spotless lamb who sensed the cold blade at his throat. He too became the scapegoat, suddenly sensing the incalculable weight of the sum total of human wickedness come crashing down upon his wounded head and shoulders. Then in the midst of all this, our Christ sensed something never encountered heretofore in eternity; the supernatural bound of the Godhead had been interrupted! Jesus bar Yahweh now hung between heaven and earth, forsaken and alone.
.
.
.
I’m overwhelmed by that moment; the one who declared that “My Father and I are one” was now alone. That Holy Communion was now replaced with the rotting stench of my sins, the selfishness of my petty whining, and the ugliness of my pride.