If Necessity is the Mother of Invention, Duct Tape is its Godparent. 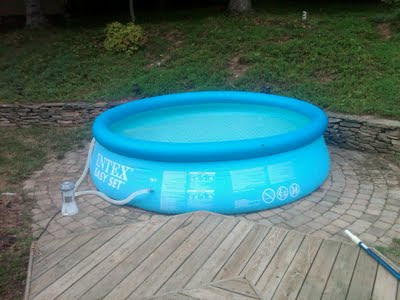 It's June. June means that its time to roll out the Intex pool for Austin. When you're five and a halfpint, a ten foot pool is a big affair. At this stage in your life, you can just about do laps in the thing.

I love this pool. The geniuses who designed it created what's ostensibly a non-rigid structure, the Goodyear Blimp of pools. The inflatable ring at the top serves to provide its initial form. Then, as the pool fills, the ring floats on the water to the point where it reaches capacity. It has a small filtration system that can also hold the chlorine tabs, preventing your one thousand gallons of water from becoming a soupy aquatic mess. The pool would be perfect were in not for the inflating of the ring.

Last year, it took close to ninety minutes to inflate the ring using a combination of lung, pump and air compressor power. This is not a fun way to spend a hot, humid afternoon. It was at this moment where the old Deacon had a brainstorm. 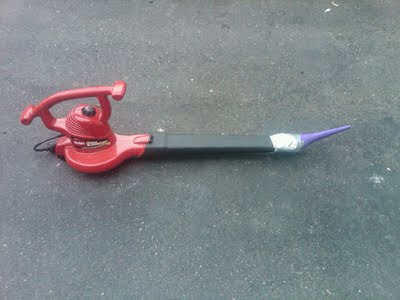 I'd seen sites on the web built to celebrate feats of Redneck Engineering. Some things were ingenious while others were deathtraps. So then, with the idea in place, it was off to the garage to retrieve the leaf blower, a funnel and the sacramental item linked to all redneck engineering efforts... Duct Tape.

The idea worked like a charm (refreshing as these things apparently go awry most times). I was careful to start the blower on its lowest speed, not knowing how the narrowed aperture would affect the blower motor. The motor was tweeked up to around 50% power output with no issues. The ring that took nearly ninety minutes to inflate last year was fully inflated within four minutes. Gotta love that Duct Tape!
Posted by Andy at 2:00:00 PM 2 comments:

Its a beautiful Saturday morning here in Suburbia Majora. Its the type of day for gardening, yard work, and a soak in the pool. Thats not happening here, as family has dropped in from out of state and Mrs. Catbird and I are playing docent at a local museum.
I've been thinking this week (a novel exercise?). I had a front row seat at an event that, though very uncomfortable to watch, caused me to think about personal empowerment within the family of Faith. I want to touch on this in the post(s) that will follow this one. I'd like to consider empowerment versus toxic disempowerment.
Posted by Andy at 10:34:00 AM No comments:

I have to confess something, something that drives me absolutely bat-scat crazy. Its the fact that the chattering class on the left has consistently, and falsely billed Mr. Orwell's cautionary tale, 1984, as a story of Conservative Totalitarianism. This is a misrepresentation of facts that could, if you'll have it, come right off the pages of Mr. Orwell's opus. Mr. Orwell, like many idealists of his generation, were caught up in the socialist fervor that held the world in sway in the early decades of the last Century. But when socialism began to show itself as the hellspawn it is, Orwell began to sound the alarm in works like Animal Farm, and the seminal 1984.
In 1984, we're introduced to a shadowy boogeyman named Emmanuel Goldstein. Goldstein has been made a pariah-enemy of Oceania, one so odious that daily at a prescribed time, all production stops in order that "two minutes of hate" may be directed against Goldstein.
The longer I watch the rotting cancer of socialism spread through our Republic like a caustic acid, the more I see the unfolding of Orwell's dystopic vision unfold. The mainstream media has become to the Cult of O, what the Ministry of Truth was for Big Brother. By and large, these blatherskites have become an official organ of Amsoc. I think a hallmark of this their fetish for "Palin loathing".
Mrs. Palin's meteoric rise to prominence in the summer of 2008 sent the left, and in particular, feminists into a protracted apoplectic spasm. This is curious as in my life, I've seen only a handful of women capable of this. I've looked at the rage from many angles and have reached a possible explanation; Mrs. Sarah Palin has successfully accomplished what the feminist has failed to do for all of her best effort. She has proven to be a successful wife, mother, entrepreneur, and leader. She has accomplished this without the need to sacrifice her children on the altar of success, or castrating her husband. Too, no fetuses were harmed in the making of Mrs. Palin. For all of her best efforts, a FOIA request has been made with the State of Alaska for her e-mails. Knowing the purity of their motives, this cynical move has been done in a feverish effort to further marginalize the Grizzly Mama.
Let me finish simply by saying that if the presidential election were today, next week or next month, I would not be voting for Mrs. Palin. My likely choice for Chief Executive at this moment would be Mr. Herman Cain, a bright, visionary leader with more integrity in his left foot than most. For all of her admirable traits and potential, Mrs. Palin is still a work in progress who like an early 1970's Ronald Reagan, could well develop into a leader of epic proportions.
Posted by Andy at 9:24:00 AM 1 comment: