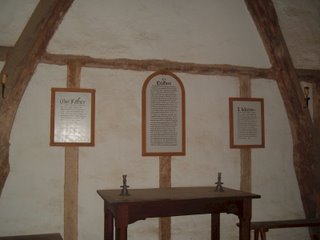 It was a hot day along the shore of the James River, where three vessels were moored at the dock. Several yards uphill were garden plots, disorganized and scattershot by our modern standards. The corn seemed to be planted without rhyme or reason and scattered between the stalks were running vines of squash. This wasn't a garden planted for the eye, it was a garden planted for the survival of its planters.
Across from the corn and squash were stalks of the demon weed, that plant rued and despised across the entire spectra of the "Nanny Culture". Yes, I'm speaking of (Gasp...) Tobacco. Funny, but of all the plants in that eyesore of a garden, it wasn't the squash or corn that ensured the survival of the English settlers in Virginia, It was that weed. Had it not been for tobacco, Jamestowne may well have gone the way of the Roanoke Island endeavor some 40 years prior. The fate of Jamestowne could have been as enigmatic as the "CROATAN" carved into the oak in the Carolinas.

I think its important to note the church that is situated in the center of the Jamestowne compound. Mind you, this colony wasn't ostensibly a theocentric community founded by individuals seeking spiritual liberty apart from the Church of England. No, Jamestowne was designed to be England's ecconomic and political beachhead on the new continent. A bulwark that sat a the mouth of a great river that could repel Spanish aggression, Jamestowne was also to be a base for the harvesting of mineral wealth. Yet there was the church, an unassuming hut of mud, wattle and thatch. It demonstrated the fact that even in a "Secular"colony, a living faith was central to the lives of those carving out a place in the history of the new world.
Posted by Andy at 9:50:00 PM