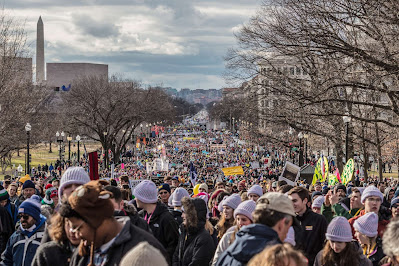 Forty  nine years ago, Ms. Nellie Gray led the first March for Life in the chill in a cold DC January. I was twelve years old at the time and really didn't know about this event.  As time progressed, I would become familiar with the march and began to develop the desire to join the throng in making my stand for the unborn.  It would be many years until 2014 when I would be able to join the marchers to make that stand for those in the womb.  It was indescribably cold that day, with the temperatures not leaving the single digits.  The wind chill only added to the January joy.

In this bitter cold, I encountered some of the most amazing young people  I ever met. Hundreds of thousands of youth whose energy raised the bitter  temperatures were there.  The event was truly multicultural where the spectrum of faith groups were represented to even include Muslims, Jews and Atheists for life.  I even encountered overtly secular groups to include Gays for Life who marched for our combined cause.  It would take nearly another Decade for our Supreme Court to see the faulty logic in their 1973 decision that burdened our Republic with Roe, and placed this on the States where it should have been from the start.

The work now continues.  While states have either banned abortion or put restrictions on the barbaric practice, others have doubled down, even pushing for post-natal infanticide.  Its my hope and prayer that this Republic will wake and apprehend the barbarity to this practice and realize that just like Dred Scott or Plessy Vs. Ferguson, that Roe Vs. Wade a faulted decision.