Almighty God, we pray you graciously to behold this your family, for whom our Lord Jesus Christ was willing to be betrayed, and given into the hands of sinners, and to suffer death upon the cross; who now lives and reigns with you and the Holy Spirit, one God, for ever and ever. Amen. 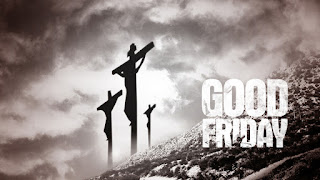 Today's Gospel passage is extremely long, recapturing the Passion narrative that was read at All Saints' this past Sunday.  I'm sharing a portion of that large passage to accompany our thoughts in this moment.

While I'd certain no one those reading this today has actually witnessed a Crucifixion, yet most have seen one or more theatrical or cinematic dramatizations of the event. Many of these dramatic recreations are relatively sterilized while some are extremely graphic and visceral.  But the bloodiest depiction fails to capture the horrors of a roman crucifixion, an execution engineered to inflict one of the worst terrible deaths a human may endure.  The Gospels capture a sense of this in their description of how the Roman execution detail broke the legs of two of the sufferer's in order to accelerate their end.

Our portion of Saint John 19 captures the Christ, in the moments leading to His death upon the cross:

"When Jesus saw his mother and the disciple whom he loved standing nearby, he said to his mother, "Woman, behold, your son!" Then he said to the disciple, "Behold, your mother!" And from that hour the disciple took her to his own home. After this, Jesus, knowing that all was now finished, said (to fulfill the Scripture), "I thirst." A jar full of sour wine stood there, so they put a sponge full of the sour wine on a hyssop branch and held it to his mouth. When Jesus had received the sour wine, he said, "It is finished," and he bowed his head and gave up his spirit." John 19:26-30 (ESV)

It was approaching 3:00 PM in Jerusalem.  It could likely have been 68 Degrees Fahrenheit or 20C and fair on any given day, but this was an afternoon like no other.  Three hours prior, an unnatural darkness enveloped Jerusalem that held the city in the grip of twilight.  In this gloom, each breath taken by the master took the full measure of his strength as he strained against the nails to fill his lungs.  No doubt, he was dehydrated and in shock from being beaten and awake for 33 hours.  For all of this, the Christ WOULD NOT die until his mission was complete.

In these moments, Jesus scans the perimeter, and sees his Disciple John Bar Zebedee with Mary, his Mother.  He commends his mother into John's care while comforting his mother that John would care for her.  Now, his thirst slaked by the sour wine, Jesus was able to cry out in a loud voice that the redemption of the Creation was complete. His words captured the sense that our sin debt at that moment was now paid in full.
Posted by Andy at 8:49:00 AM