The First Sunday after Epiphany -- The Baptism of Jesus 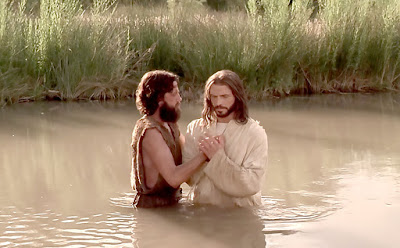 I was blessed to deliver this morning's Homily for the First Sunday in Epiphany, the day the Western Church remembers the Baptism of Jesus in the Jordan River at the hands of John the Baptist.

Thesis:  Christ’s Baptism was far more significant that what was caught by the mortal eye.

The Father’s Direct Will

Today is the first Sunday within the season of Epiphany, and the Sunday on which the Western Church recalls Christ’s Baptism in the Jordan and the launch of his public ministry which would ultimately culminate outside of Jerusalem on a hill called “The Skull”.  In the three years between the moment that John proclaimed the Nazarene as the Lamb of God and Pilate rightly named Him “The King of the Jews”, Jesus would light Judea, Samaria, and Galilee ablaze with proclamation of the Love of God the Father, and how all who would embrace the Good News of Kingdom, Jew or Gentile, might become children of the Most High.

Those of us who grew up in Church, learned of Jesus’ Baptism through Ditto papers, coloring sheets, or on flannel graphs.  Yet, for far too many, the understanding of this event has not been expanded beyond what they learned at those tender ages. I could easily number myself among those, until I began a serious study of Scripture. After I did begin this endeavor, it was a portion of the dialog between Jesus and John that left me perplexed; this being where Christ exhorted John to continue, as it was fitting for them to continue in order to “Fulfill all Righteous”. Let’s, over the next few moments, consider just what being said at this moment.

Saint Mark tells us in the opening words of his Gospel, how Saint John the Baptizer “appeared, baptizing in the wilderness and proclaiming a baptism of repentance for the forgiveness of sins”.  While not normative in the Jewish experience, Baptism existed first existed in the realm of types and shadows in pre-exilic Israel, then in practice in the inter-testamental period. In Psalm 51, David conveyed the desire to be washed and cleansed after his falling into transgression with Bathsheba. Centuries later we learn how the Essene community of Qumran incorporated the rite for those converting to Judaism.  On the seventh day following their circumcision, the convert underwent a ritual baptism which marked their entry into the community of Israel. A number of scholars believe that John, at the very least was well acquainted with the Qumran community.  Regardless, the Lord in His grand design, used John and a Baptism of repentance to prepare hearts for the coming of Messiah. John would prove to be that one voice crying in the wilderness, “Prepare ye the way of the Lord”. Yet for the beauty of this awakening there were certain priests, who were scandalized by John’s ministry, and went down to the river to discern what was occurring. John set aside all small talk, and exposed their motive. It was there in the midst of the showdown between Sadducee and Nazarite, that the Nazarene entered the story.

The Baptizer spoke to his hearers and disciples about the one who was to come. He had no illusions of being a ministry partner or peer to him. As to this coming one, John considered himself not even worthy to serve at the level of a lowly house servant, like the ones who’d remove their master’s sandals to wash their feet upon their returning home. But as he described his low estate, he also spoke of the mighty Baptism that he’d offer.  While John baptized with water, the Christ would baptize with “Fire, and the Holy Spirit”.  At some moment as the two locked eyes, John became acutely aware for the Fact that he was encountering Deity.  This wasn’t the first time he’d encountered the Son of God; thirty years prior, he’d experienced an epiphany in-utero, when encountering the babe in Mary’s womb.  And now, ust as Isaiah proclaimed “woe is me”, and as Daniel fell as a dead man, John was acutely aware of his unworthiness to stand in the Lord’s presence, let alone baptize the one who without sin.  It was here where Jesus said:

"Let it be so now, for thus it is fitting for us to fulfill all righteousness." Then he consented. Matt 3:15

It was in this moment of John’s reluctance to baptize his Savior, Jesus counters in urging John to Baptize him as a fulfillment of all righteousness. I have to admit that this was a puzzle on multiple levels.  John’s mission and ministry was to offer a Baptism as a sign of repentance to the contrite.  Yet, the one who knew no sin stepped forward to receive this Baptism.  The key to understanding this paradox is rooted in understanding the “righteousness” which Christ spoke of in this moment.

The term Jesus uses here, speaking to fulfilling all righteousness, speaks to being in perfect submission to the requirements of God the Father.  So, in a more direct manner of speaking, “John, you WILL baptize me because my Father and your God demands and expects nothing less.”
Christ’s Baptism is intrinsically linked to His Death on the Cross

On that day, Christ’s Baptism served to identify him with those he came to redeem.  While those who went under the waters of Jordan, confessing their sins, Jesus had no sin of which to repent of. Christ was now identifying with all humanity and all the sin they were capable of. Yet, He who knew no sin, bore our sin and the sin of all humanity.

John, perhaps not fully apprehending all of this, was to be the obedient participant in this great move of God. He plunged his cousin, the very expression of the Godhead into the turbid waters of the Jordan. I suspect scant few gave this moment any additional scrutiny.  Yet when Jesus rose from the waters, everything changed.  Mathew notes:

“And when Jesus was baptized, immediately he went up from the water, and behold, the heavens were opened to him, and he saw the Spirit of God descending like a dove and coming to rest on him; and behold, a voice from heaven said, "This is my beloved Son, with whom I am well pleased." Matt 3:16-17

Now, for the second time in the life of Jesus, the firewall between the Eternal, and the realm of time and space was rent as the Holy Spirit, in the image and form of a Dove descended upon Jesus.  Then, perhaps like a sonic boom tearing the very fiber of our atmosphere reverberated with the voice of God Almighty proclaiming:  "This is my beloved Son, with whom I am well pleased."

Given the atmospheric properties of air moving through a valley, I suspect there where none that day who missed the voice of God, leaving all without an excuse.

So, this leaves us with questions with Eternal weight.  Christ Jesus shattered the barrier between Time and Eternity to identify with us in His Baptism, that he might be an Appropriation for our sins.  Have we identified with him in the waters of Baptism?
Baptism isn’t only for Children.  If you’ve given yourself to the Almighty but have never underwent the waters of Baptism, that is a treatable condition.