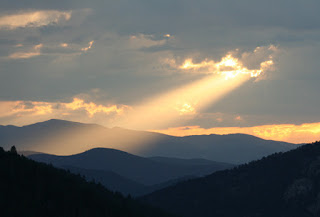 From this morning's Gospel reading:


"Now among those who went up to worship at the feast were some Greeks.  So these came to Philip, who was from Bethsaida in Galilee, and asked him, "Sir, we wish to see Jesus."  Philip went and told Andrew; Andrew and Philip went and told Jesus.  And Jesus answered them, "The hour has come for the Son of Man to be glorified.  Truly, truly, I say to you, unless a grain of wheat falls into the earth and dies, it remains alone; but if it dies, it bears much fruit.  Whoever loves his life loses it, and whoever hates his life in this world will keep it for eternal life.  If anyone serves me, he must follow me; and where I am, there will my servant be also. If anyone serves me, the Father will honor him.  "Now is my soul troubled. And what shall I say? 'Father, save me from this hour'? But for this purpose I have come to this hour.  Father, glorify your name." Then a voice came from heaven: "I have glorified it, and I will glorify it again."  The crowd that stood there and heard it said that it had thundered. Others said, "An angel has spoken to him."  Jesus answered, "This voice has come for your sake, not mine.  Now is the judgment of this world; now will the ruler of this world be cast out.  And I, when I am lifted up from the earth, will draw all people to myself."  He said this to show by what kind of death he was going to die.  So the crowd answered him, "We have heard from the Law that the Christ remains forever. How can you say that the Son of Man must be lifted up? Who is this Son of Man?"  So Jesus said to them, "The light is among you for a little while longer. Walk while you have the light, lest darkness overtake you. The one who walks in the darkness does not know where he is going.  While you have the light, believe in the light, that you may become sons of light." When Jesus had said these things, he departed and hid himself from them." John 12:20-36 (ESV)

So much had happened in a few dozen hours; a man dead four days was walking among the living, the words of Zechariah 9:9 had been fulfilled:


Rejoice greatly, O daughter of Zion! Shout aloud, O daughter of Jerusalem! Behold, your king is coming to you; righteous and having salvation is he, humble and mounted on a donkey, on a colt, the foal of a donkey.

In my own story, I can recall days in what was then West Germany when the Sonic Booms of NATO warplanes would shake our home.   They were sudden, and impossible to ignore. Like those sonic booms, the voice of God the Father exploded in the atmosphere and rolled like thunder.  Doubtless, many of those gathered in Jerusalem for the passover may have sensed in their hearts that they were on the cusp of something epic, something that was paradigm-shifting. Yet for all of this, the Christ is standing center stage, with a heart growing heavier with each beat.

A heavy heart is not an enviable possession and I suspect that most reading this this morning have the sense of a heavy heart.  Even so,  our heaviest of hearts could never even approximate what Jesus was experiencing.

What weighed on Christ's heart? Was it the knowledge that in less than 72 hours, he would become the recipient of 15 hours of hell on earth? Was it knowing that the city where he stood would be leveled and her residents the recipients of imperial genocide? I suspect that what was occurring at present was certainly a cause for sorrow. At this point, the city was swelling and surging as pilgrims filled Jerusalem in preparation for the Passover. The lion's share of those coming for the Lamb of Passover would ultimately reject the Lamb of God.
Posted by Andy at 7:45:00 AM