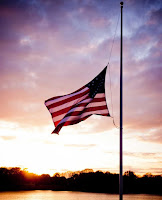 Its a bright, cold Tuesday as we press into Adventide 2018 here in Suburbia Majora.  Today is just a bit colder, considering that our Republic now mourns the passing of who might be considered one of our last Kinder, Gentler Presidents of recent memory President George Herbert Walker Bush.

In an age where bluster and bombast seem to be our chief bi-partisan activity, many who know nothing of President Bush would be easily tempted to dismiss him as a meek, milquetoast figure.  This could not be farther from the truth.  Unlike our present age where male adolescence seems to last deep into the 3rd decade of life, President Bush lived in a world where 18 year old males were men in every sense of the world.  Though denied a vote, or even the privilege of legally hoisting a frosty beer in toast to their victories, these young men courageously rose to whatever challenge standing in the way.  Their safe spaces were their foxholes, armor, or aircraft cockpits.  "Triggered" was what happened to their weapons that were wielded in defense of liberty, and the annihilation of Totalitarian Fascism.  Which speaking of, they clearly saw true fascism for what is was, not merely things or ideas that they found distasteful.

I would challenge any would-be rising young person to consider the lessons of lives the like of our late President Bush.  Rather than allowing Leftist organs to tell you what to think, consider the man in his own words.