In the Days of Rogation 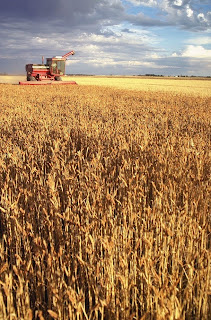 It's Rogation Tuesday (Boo-yahh, said the Anglicans), and although Anglican, Anglo-Catholic and Roman Catholic readers may be familiar with the idea of Rogation Days, I'm relatively certain that those from other streams of orthodoxy may have no idea as to the day or its implication.
The name is derived from the Latin verb, rogare, which means simply "to ask". Think back to Sunday's Gospel reading (John 15:1-8), and you'll recall the idea of asking for a thing in Christ's name.
Rogation days have traditionally been a season for seeking the Lord. In eras past, farmers would seek the Lord's blessing on their crops. Priests and their parishes would "Beat the Bounds", processing along the Parish property lines while seeking God's hand to move in the church over the coming days. Its interesting to note that this latter practice is alive and well in many Pentecostal or Charismatic congregations, though its better known as "Praying a bloodline" around the church. I wonder how many would continue this practice if they became aware of the (gasp...) RC and Anglican origins of the practice? Anyhoo, I digress.
We are essentially a post-argarian society where most of us will never harvest any crops more significant than patio tomatoes. This said, as followers of the way, we still are called to possess a harvest mindset. We are, by virtue of our new births, co-laborers in the Kingdom of Heaven. Outside our doors stand the greatest harvest field in the history of mankind. Post-Christian United States alone is a field that would stagger the imagination. Christ, two thousand years ago, described these fields as awaiting harvest. I wonder, if the fields were ready for the harvesters 2,000 years ago, how much more are they ready today?
Jesus called His own (READ-- us) to pray that the Father would sent laborers out into these fields. Saints and servants were (are) exhorted to pray for the harvest. In this, I see a powerful tie-in to the concept or Rogation Days.
Have we in prayer, sought to discern our role as messengers for God's Kingdom? Is our walk and witness congruent with the Savior we claim as our own? Are we reaching out in prayer into these fields? All of these are worthy questions to ponder on a Rogation Tuesday.
Posted by Andy at 12:09:00 PM