Winter Purple (Thoughts of Advent I) 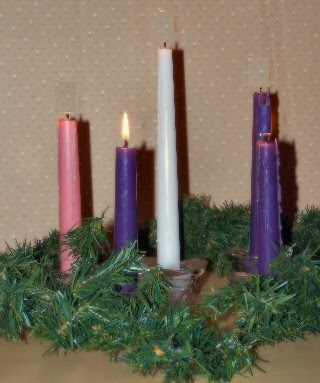 Veni, veni, Emmanuel...
If there were only one sacred song that spoke to the longing in the pilgrim's heart, it would have to be "Oh come, Emmanuel." The song has been with us in varying forms since the 8th or 9th century and has been done in by nearly every one from 15th Century Franciscan Nuns to Bryan Duncan. Any efforts to spice it up only degrades this powerful hymn of Advent. Whenever I have heard or performed Oh come..., a visceral longing would rise from the well of my soul.
The world outside our windows is buzzing like a beehive. People are running up their credit accounts buying "stuff" for a holiday whose name dare not be uttered. Lawns have become crass jumbles of inflatable Homer Simpson's, snowmen and penguins with enough illumination to ensure that they're visible from space. I'm no crumudgeon, and I enjoy seeing tasteful, well-planned christmas displays. I bring this up only to make the point; if Emmanuel were to come tonight, what would He think? Or, how many consummers would recognize Him in the midst of their spendfests?
In the introspective moments of Advent, we might meditate on a few of these: Why the color purple? Would I have been one of those waiting for the consolation of Israel? Do I live as one laboring in the shadow of Emmanuel's second Advent?

Oh, come O Rod of Jesse's stem,
From ev'ry foe deliver them
That trust your mighty pow'r to save;
Bring them in vict'ry through the grave.
Rejoice! Rejoice! Emmanuel
Shall come to you, O Israel!